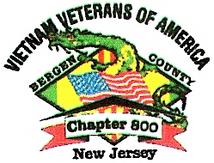 The Vietnam War was a terrible period of time for our country.  We went into the war with the idea of stopping the spread of communism, but the rest of our nation was against this idea.  The number of American troops that were sent to defend these ideas was approximately 2.5 million.  While our troops were in Vietnam, they experienced some of the most gruesome warfare that has been seen in all of history.  These experiences have scarred the soldiers both physically and mentally and those scars have lasted over 40 years.

Many of these soldiers came back with PTSD.  PTSD is post-traumatic stress disorder and its symptoms can include night terrors and certain events in your life can trigger a memory from that time and cause the person to think they are back in the war. You would think that when the soldiers came back from the war they would be treated in hospitals for this disorder, but sadly, they were not. They were left to figure out what was happening to them without any medical attention. Not receiving help has caused many soldier’s lives being haunted by memories of that war.  The fact that the government did not immediately help these men is shameful.  It didn’t stop at the disorder either.   Many were left without jobs, a home, and some not having enough clothes on their back. In many areas of the nation, seemed like they didn’t exist. They needed help when they got back because everything changed while they were away.  They needed support to be able to get back on their feet and help to fight their way back into society.

Society was another problem they had to deal with when coming home as well. Many protested, some men left the country, and others just went against the government. They had the idea of that sending men over would do nothing and were just sending them over to die. In reality it was for the stopping of communism. If not stopped or suppressed, communism may have went to all four corners of the world. It was a necessary thing to send our men to Vietnam to show that we wouldn’t bow down to communism but stand against it and make sure that it can’t take over any other nations.

The fact the veterans were treated poorly was terrible.  The sacrifices they made were overlooked by many people which is a disgrace. After the men came home, they should have come back to help for their injuries, ceremonies to honor them and help to get back to their daily lives.  Instead, they got nothing in return for risking their lives.  Thankfully, 40 years later, some of this has changed in the form of memorials and knowledge.  Through events like parades and memorial, this generation can be informed of what these soldiers went through and hopefully be appreciated for years to come. h here.

Here are the essay winners of the Chapter 800 Annual Scholarship awarded to HS seniors who are relatives  of members. They each will receive a $1,000 scholarship 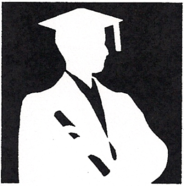 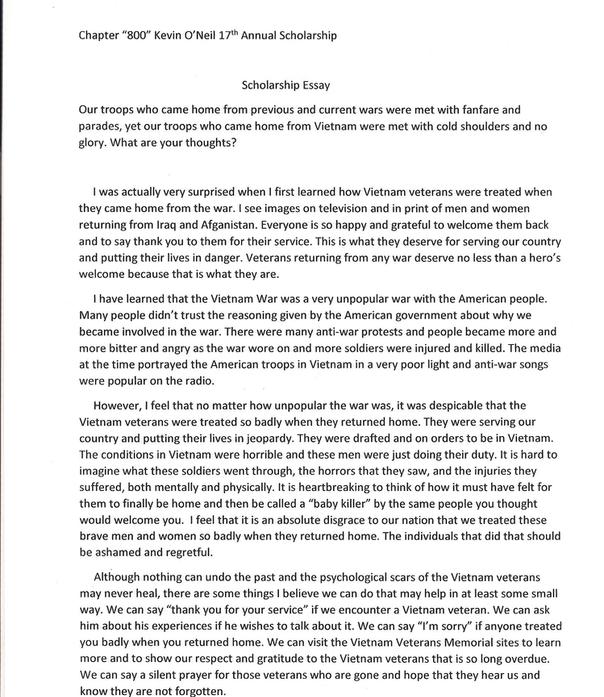 Nowadays, when troops come home from war, they are warmly welcomed with open arms by friends, family, and United States citizens. However, troops who came home from Vietnam, were not as warmly welcomed. In fact, they were almost shunned for fighting the war in the first place. They did not get parades or fanfare but were called names and abused by citizens awaiting their return. Troops returning from Vietnam even began to go into hiding so they would not be ridiculed or feel the wrath of the public. When I heard that the troops were “spit upon” I didn’t think that it meant it literally. I thought it was just saying that they were ridiculed. But it turns out that some troops were actually spit on upon their return, as well as even having things such as coke cans thrown at them by the public. I feel as though this was unfair to them. They were fighting to protect our country just like the troops are today. The only difference is that the troops today get to feel a sense of pride and honor for their services. Anyone willing to lay down their lives to protect others should have that same feeling. They should not have to worry about being abused or ridiculed for protecting the ones they love and care about. Although many people may not have felt that what the troops were doing in Vietnam was right, I also feel that the way they were treated upon their return was almost rude. I think that after going off to fight for the United States, they would at least expect some thanks or appreciation. About 58,214 soldiers were killed in the Vietnam war. Many of the soldiers that were in the war, whether they were drafted or they volunteered, had families or loved ones at home whom they left to go and join the fight. I can’t imagine how badly they must have felt when they returned and people were angry with them or could care less that they got home safe. Overall, I think that the way that the troops returning from the Vietnam war were treated was terrible. I feel as though they deserved a better welcome than they were given, one like the troops who come home from war today are given. They were doing something for others by serving our country and they deserved to be treated like it.

When soldiers come home from a harrowing war, usually they are greeted by their fellow countrymen with fanfare and parades.  They get to bask in the glory and are celebrated as heroes who have made the world a safer place for  Democracy.  This was obvious during WWI and WWII, with many large and great parades and celebrations in the glory of the men who fought for Democracy.  This was however not the case for soldiers who had returned from Vietnam.  Many of the soldiers who had served in the Vietnam War, were drafted into the war and were bitter that they had to fight in a war they wanted no part of.  Vietnam was also the first war to be televised for the entire population of the United States to see.

Due to the fact that the United States Government had drafted men into the military in order to fight the war, it was not popular with many citizens.  Families had their oldest sons taken, wives had their husbands taken, men were forced into fighting for their country.  Some men had enlisted voluntarily, but many were drafted and sent overseas unwillingly.  With families back at home that were missing a pivotal figure in the household, such as an older brother or a father, it was harder for the wives and mothers to care and raise the family.  This fact made the war very unpopular with the general public back at home.  It was clear that the war and the draft that the government had put into place was harming domestic lives for many citizens.

With technology enhancing over the decades, the invention of the television had some about.  With that meant the enhancement of information and how fast it traveled.  With the television, the general population of the United States was exposed to the Vietnam War.  The population had been exposed to war before, with both world wars, however, this was different.  Before, the government had an easier time controlling what was being released to the people, now with the television it was extremely hard for the government to control the flow of information to the population.  People were exposed to the horrifying sights of war, and the gloom of what war really was.  Everyone knew that the war wasn’t something  that was pleasant, but unless  you had served, you didn’t know what the horrors looked like.  The public, upon seeing  the war second hand via the television, rejected the war and wanted nothing to do with it.

While fighting the VC, our soldiers could not always tell the difference between a civilian or an enemy soldier, often killing and disposing of the enemy.  The public saw this, how infants were used as decoys and bombs to trick our soldiers.  How women and children were dragged into the conflict by the VC and how our soldiers had no choice but to defend themselves against such threats.  People were outraged and disgusted with these acts of utter violence, wanting nothing to do with the military or soldiers that had come back from the war.  It is not the soldier’s fault that they were shunned and given little to no support from the public upon return.  It is the fault of the media, and their utter destruction of the military image.  Showing our population and the world what had been happening on active battlefields, reporting the death tolls of soldiers and civilians.  Reporting on the brutal acts that soldiers had to commit in order to survive and to be able to safely return home to their families and loved ones.paragraph here.

At the time of the Vietnam War, the country split due to personal beliefs and politics. The army was made of up drafted soldiers who had no say in whether they left to fight or not.

When Vietnam soldiers returned home they were greeted with cold shoulders and no glory. A large amount of Americans did not believe it was right to be involved in the war and so when our soldiers returned home they used their feelings against the soldiers. Many Americans used our soldiers as scapegoats of the many problems we faced at the time. They blamed soldiers for the problems that they faced with the country. They seemed to not understand that many of the men going into the war did not want to leave their lives in America to go and fight in the war. Rather than being grateful that it was not them who had to leave and that the war was that much closer to being over, they ignored and degraded the men who were forced to go into battle. The country did not appreciate all that the troops had given up for us because they let their own problems blind their views of the situation.

In contrast, the troops who have come home from previous and current wars are met with parades and fanfare. As time has gone on, we as Americans have learned to stop blaming our soldiers for the problems that we face with our country and government. As a country we have become much more accepting and appreciative of all that our troops do to protect our country. We see that there are many men and women who voluntarily put their life on the line and sometimes even give the ultimate sacrifice to protect our freedom and liberties. We now call the men and women who give their time and energy to fight for our country heroes.  We celebrate them and thank them for their service whenever we see them.

We seem to look up to service men and women now meanwhile we treated our troops returning from Vietnam as if they were dirt beneath our feet. People let their own attitudes get in the way of what truly heroic acts that these soldiers were performing. Although history cannot be changed, we should honor those who served in Vietnam and continue to honor those who are serving now. Fanfare and parades should be given to all those who dedicate their life to protecting the citizens of this country and preserving our freedom. 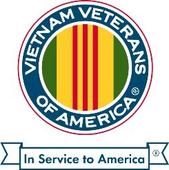